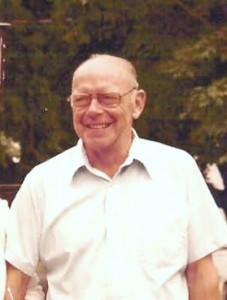 Robert Christopher Fraley was born 11/21/1917 to Harry and Anna Fraley of East Smithfield, PA, the youngest of three sons. His brothers were Glenn and George, both deceased. He died 04/12/1991 in Athens, PA, in his home at the time, following a long battle with stomach cancer.

Robert was married to my mother, Jane Alice Harrington Fraley, and the couple lived their entire married lives in Athens, PA. Robert’s primary profession was as a service manager at a Chrysler-Plymouth franchise owned by his oldest brother, George. He attended the Athens United Methodist Church in Athens most of his life, and was a 32nd degree Mason. He loved to hunt and enjoyed other outside activities such as barbecues and family gatherings. He was always a pleasant person to be around and made folks feel very comfortable when in his presence. He is buried in Union Cemetery in East Smithfield, PA., where a suitable marker defines his burial location, atop a small hilly area overlooking pleasant farm lands and buildings below.

Robert and Jane produced three children, in order, Larry, Ann and Bill. A first child, Robert, was born and died at age 1, about 2 years prior to the birth of Larry. Jane died on March 24, 2014, and is buried in Union Cemetery in East Smithfield, PA., in the same plot as the man she loved for so many years.

More pictures of ROBERT and JANE are found at the ADULTS section of the PHOTO GALLERY. The pictures below are of him at a very young (4?) age (LEFT), with his two brothers Glenn (middle) and George (right) (SECOND FROM LEFT), as a father with his 3 children, Ann, William (Baby) and Lawrence (THIRD FROM LEFT) and as a young man of 15 while on the farm in E. Smithfield. Last picture was taken in 1932 and if he was 4 in LEFT pic, it would have been taken in 1921. 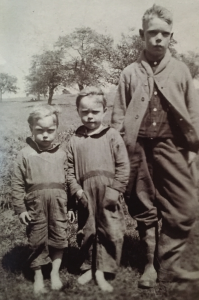 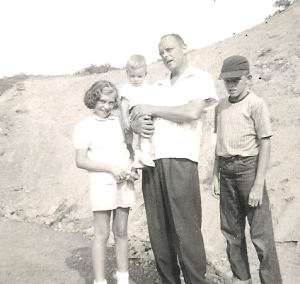